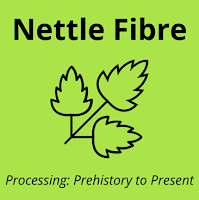 There is one question that comes up frequently when looking at how nettles have been used and processed into fabric during prehistory:

"How long did that take to make?"

As with all prehistoric textiles, there are many factors that we don't yet fully understand, although recent studies have confirmed that most Neolithic and Bronze Age linen and nettle textiles were spliced, rather than spun from unretted or very lightly retted material. Several techniques are plausible. Flint scraped fibre or dried then rubbed or rolled bast strips yield good results for splicing, weaving, and cording. 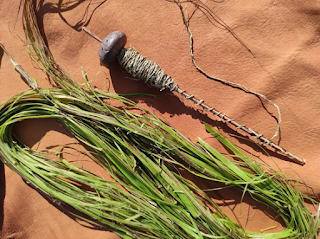 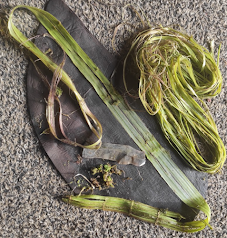 Reports from within the Nettles for Textiles Facebook group suggest an average yield of around 1gm of quality fibre per typical European nettle, and this appears broadly true across a range of processing methods, giving us a starting point for estimating how many nettles went into any sample.
However, we have had very few discussions about the time potentially spent collecting the raw material before processing proper begins.
To try and address this, in the summer of 2020, I invited members of the Nettles for Textiles group to time themselves picking, splitting, and peeling nettles. The hope was that the results could be used in discussions about the time needed for initial harvesting of nettle bast alongside the ‘1g fibre per nettle’ estimate already in use.

Forty people, mostly in the UK and Europe, participated in this experiment. They picked 483 nettles in total. Results provide information on the methods used to harvest nettles, how they were split before peeling, and how long it took to get from a nettle in the ground to bast strips suitable for further processing. 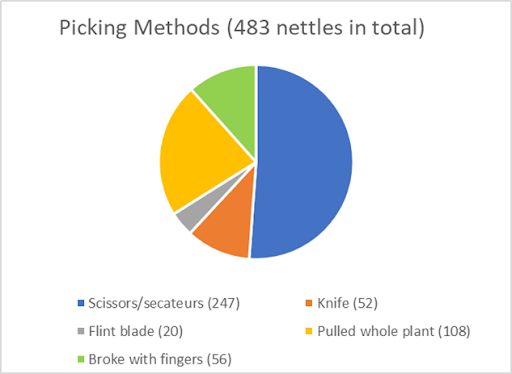 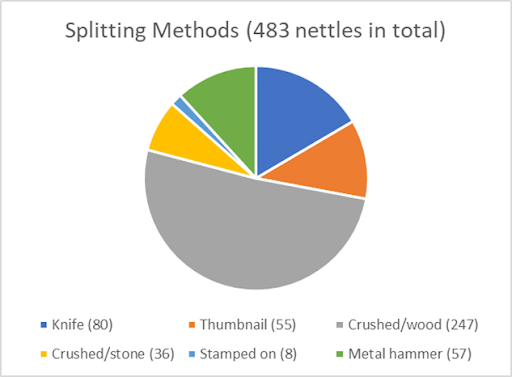 Times ranged from 1.2 minutes to 15 minutes a nettle, although this last is an unusual outlier, most people came in at under 5 minutes. Although the data was anonymised, feedback suggested that several of the slowest pickers were absolute beginners who quickly gained confidence and speed after the first nettle or two. 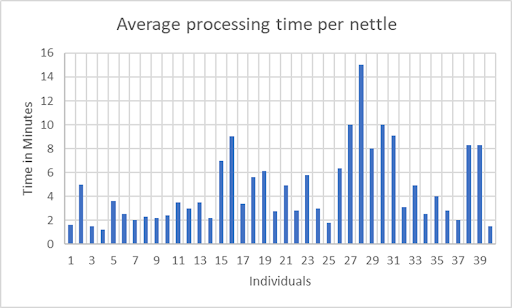 Because of this, it may be safer to use groupings within the data that suggest an average time range for more experienced pickers and assume that beginners in a group regularly and actively processing nettles quickly gained confidence. If the three slowest are discounted, the average becomes 4 minutes with a likely well-practised range of 1.2-4 minutes per nettle to pick and peel. 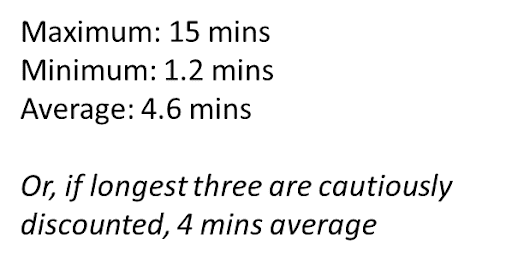 As a range of picking and splitting methods were used, nothing specific can be said about whether one is more efficient than another, but we don’t know what methods were favoured in prehistory either. A blend of methods may be the most realistic scenario, especially if it seems reasonable to assume that our prehistoric counterparts self-selected nettles much as we do, such as by avoiding ones that are very short or very branched. 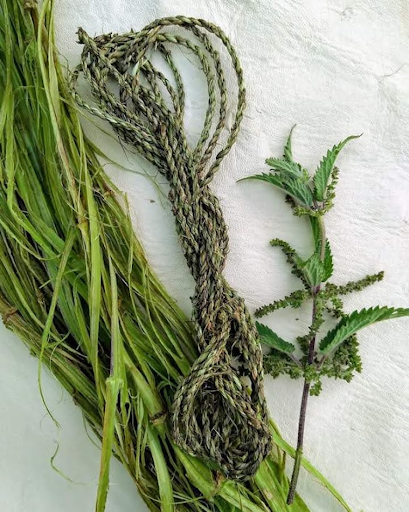 Using the current estimate of fibre yield and the likely range of time needed to collect and initially prepare the nettles can therefore help us get a sense of the relative time ‘value’ of an item.

As an example, an 100g 'tea towel' sized cloth would need around a hundred nettles and at least 2 but probably closer to 6.5 hours preparation before splicing and weaving could begin. 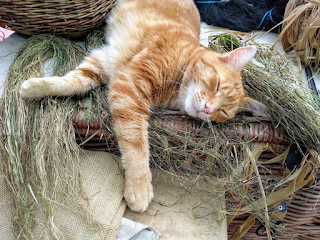 Many thanks to all the volunteers who helped with this experiment. We may not have solved the eternal question of whether an archaeologist's cat improves nettle fibre by sleeping on it, but we have got just a little closer to understanding how much time and effort was necessary for early nettle textiles.

Our main website is at www.sallypointer.com, we've been moving the projects and more 'conversational' posts over to this blog to keep the main site a bit less cluttered. You'll also find our online shop there.
We also have another blog, Wicked Woollens, where I post about (mostly) things to do with knitting, wool or textiles. There will end up being an overlap with this blog.
My Ravelry designer page has details of all my currently available knitting patterns on it.
Follow us on Twitter @sallypointer